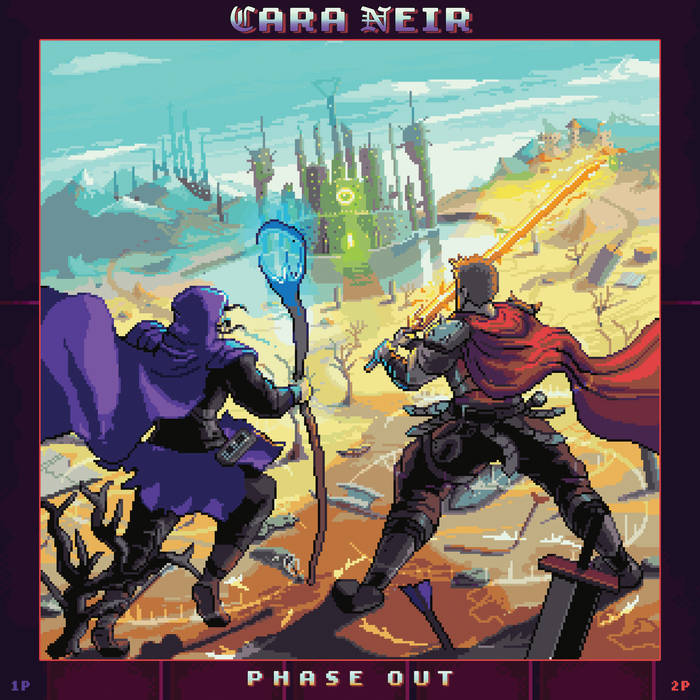 Tapes /76, 25 on Player 1 (swirl), 25 on Player 2 (swirl), 10 on Stage Select (white), 5 on Level Complete (swirl), 3 on Bonus Stage (swirl), 3 on Secret Door (???) and 5 Game Demo test dips, all w/double-sided, fold-out jcard and download code. 10 songs. There are two Ultimate Editions available that include all of the variants. Order from Zegema Beach Records distro:

This album is about the band being warped into a 8-bit video game dimension by a sinister alien entity [origins latently go back as far as their first release Part I/Part II]. In this album, the entity is now highlighted as the grand antagonist phasing the band out into fantastical RPG-like depictions of themselves traversing different songs as game levels for his morbid amusement. The only way to escape is to beat him.

The listener will experience a range of bits, bleeps, beats, and buzzing sounds you might hear from 90's dungeon crawlers and JRPG's, all sprinkled within their shape-shifting genre-bending hysteria. Enjoy the ride.

"In an endless sea of stars, lurking beneath the first veil of our universe, an interdimensional being known as The One From Trimjrtle has resurfaced. He has been known to meddle with the lives of countless beings for thousands of years, a devious dabble benign to some while demonstrably baneful to others. Many suffer as victims and pawns for his cosmically warped amusement as he plucks them out of their reality and into a perilous video game dimension within the mysterious universe of GNAX. However, these pernicious deeds fail to fully satisfy as no contestant has ever lived long enough to... more

All songs written, recorded, and engineered from June - November 2020.

Bandcamp Daily  your guide to the world of Bandcamp